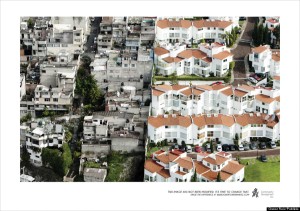 Is it possible for design to address big structural issues, like inequality, or is it destined to the incremental tweaking of existing experiences?

Jocelyn: As I’m answering this question from the UK, I thought I’d tackle it by thinking about a very recent example of a complex political and structural quagmire: Brexit.

The analysis of the referendum – surprising, momentous, painful – is still unfolding. However one thing seems clear: the Leave vote was an expression of popular discontent. And though the target may be misplaced, we can’t tell people they’re wrong about feeling unhappy. The genius of the ‘Leave’ campaign was to tap into a set of latent frustrations and channel them into a single action.

The reasons for this brewing discontent are only murkily understood as something to do with unequal power dynamics between the corporate world and ‘ordinary people’, between the intellectual elite and the working class, between outward-looking progressives and nostalgic conservatives, between the haves and the have nots. In short, some very long term conditions, difficult to perceive, grapple with and affect.

What can design possibly offer here?

There are already some socially-conscientious designers out there, attempting to make public services more user-friendly, or helping policymakers think more creatively about a particular problem. But in the shadow of challenges such as years of entrenched inequality, this kind of design work can feel like merely tinkering with a broken system. So what is the alternative? Is there anything design practice can do when it comes to the bigger picture? How could it position itself to make a difference? Is there a halfway house between the radical’s ‘design activism’ and the consultant’s ‘design in the service of government’?

In principle, design has some practice that might be useful. For example:

However it’s the position of the designer in the system that is the real challenge: the radical’s dilemma. It is always difficult for anyone employed by a system to be overtly challenging to it. So we shouldn’t rely on the design industry to deliver this as part of the day job.

Instead we might want to think about designers taking their skills into other roles – becoming politicians, public managers, business leaders, etc. But I would argue that we also need a new class of critic. Perhaps the 21st century’s public intellectual should instead be the ‘public practitioner’? In fact the design community is on the verge of offering up to the world a community of public practitioners: people with one foot in the system and a critical mindset, mixing thinking with practice with participation in public debates. We can help by opening up dialogue on what this kind of politically-engaged practice means, and could be.